Researchers use microwaves to measure signs of dehydration 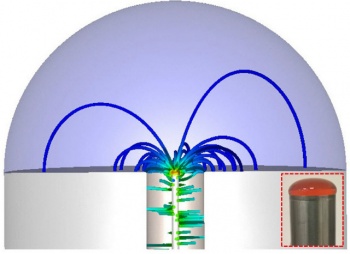 The microwave sensor technology measuring a droplet of blood.
The researchers are now looking to develop the technology into a wearable device that could be used by athletes, or in healthcare settings, to monitor hydration in real time.

For the study, the research team utilised a microwave-based measurement system, developed by NPL, to examine changes to salts and proteins such as haematocrit and albumin, which are present in the blood and influenced by dehydration.

They found they were able to accurately measure the levels of these biomarkers using dielectric sensor technology that recorded the microwave absorption through different blood solutions.

Dr Tina Chowdhury, Senior Lecturer in Regenerative Medicine at Queen Mary, said: “The next step is to turn the microwave sensor into a non-invasive, wearable device that will track the dehydration biomarkers associated in real time. We hope the devices will be a portable and reliable way for athletes to detect dehydration, and in future, we will need to investigate the suitability our current prototype device to ensure it works for athletes during moderate to strenuous exercise.

“However the applications of this technology aren’t just limited to the sporting community. The ability to track important molecules and proteins in human blood, which are well-known signs of dehydration, is also of importance for healthcare settings.”

Dehydration is a continuing problem in the healthcare sector and can lead to multiple organ failure, and even death in patients. The NHS estimates costs of around £13 billion in the UK due to malnutrition, which causes dehydration.

Current methods used to assess hydration can be time-consuming, often involving of the preparation and analysis of urine or blood samples that are unable to be re-used for further testing.

Other non-invasive devices that actively measure hydration have been proposed; however, most depend on the use of chemical sensors to detect molecules in bodily fluids such as sweat or plasma. This type of approach is only able to provide an estimate of hydration levels and can be influenced by the physical attributes and daily behaviours of the individual.

One of the benefits of using microwave dielectrics is the ability to measure multiple factors simultaneously from a single sample.

Dr Rob Donnan, Reader in Terahertz Engineering at Queen Mary, said: “Adapting conventional microwave instrumentation to biological study requires careful thought for meaningful data to be obtained. This work has begun to do this and we look forward to developments that may lead to a viable patch sensor for gauging how hydrated a person is.”

The research builds on previous work from Dr Richard Dudley and Dr Mira Naftaly at NPL, who developed a wearable device called Hydration Sensor, which uses microwaves to monitor hydration by measuring water levels in the body.

The team will use the Hydration Sensor technology, which attaches via the ear lobe, to transform the microwave sensor system into a simple, portable device that can track selected biomarkers of dehydration over time.

Dr Richard Dudley, Science Area Leader at NPL, said: “The development of our on-body hydration monitoring device has been held back by two challenges; a quantifiable relationship between blood and microwave measurement, and a measurement device that has good contact to a subject and remains stable for at least an hour.

"Working with Queen Mary has helped us address the first and we are now confidently working towards engineering a solution for the second. Our ambition is to see our ‘hydration devices’ sold alongside heart rate monitors and blood pressure systems.”